I've spent a fair amount of time in the past couple of weeks around some amazingly creative people and it's been a bit infectious. Last weekend I sat down to  make steady planned progress on two projects I've been working on for a while. Instead I drafted a new pattern and blitzed up two tops over the course of a day and a half. One's not quite done and neither have been photographed yet but they'll surface in the near future.

One of the things I managed to catch last week was the end of A Bigger Splash at the Tate Modern. I think the objective of the exhibition was to illustrate how artists came to place value on the process of creation rather than just the value of the final product. It was a pretty enlightening exhibit and I've decided to shamelessly use it as a springboard to talk a bit about the progress on the MW dress. That way, if it does ends up accidentally looking like a piece by Kazuo Shiraga then the value in the process of this garment will still remain.

So what progress has been made? I had drafted a whole post at the end of December about a second muslin I made incorporating the changes from the first one I pinned out. But I don't even have any pictures of it, it went so badly. Nothing at all matched up, it strained and bagged, the neckline was wrong and a couple of the seams were so fudged I was going to wrap the dress up into a Thorntons gift box.

The picture below doesn't look like there's a big difference between the pieces, but the modifications were based on accidentally sewing it in the wrong way up, then applying modifications upside-down.


So I totally fell out of love with the project. It ground to a massive halt because I also couldn't decide what it should actually look like. I still don't know. But for some reason it's got to get done. It was a New Year [res]Sewlution, considering some of the other pledges in that jar, making one measly dress should be easy!
I've done the only sensible thing and started all over again: retraced the pattern and graded everything down to a 34 and a 32 just in case. I've prepared a muslin "properly" according to Linda Maynard and spent time pinning and adjusting the new one. 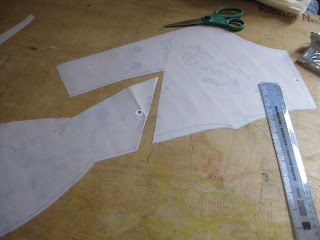 I've also tried to be more methodical with the flat pattern adjustments. On the first pattern I knew it was a basic bodice where the panel seams incorporated the darts, and I still wasn't sensible in how the pattern got altered.This time I've tried to reduce chances of getting confused, so I taped pieces back together, did the modification, and then separated them again. 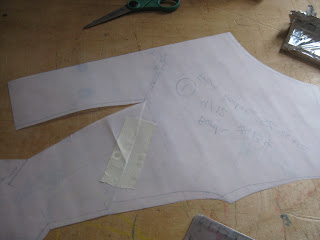 So here's the partially altered new muslin. The opening is pinned in my right side rather than the centre back (where the zip will be), and having a pinned kimono sleeves is a right PITA (armpit), so excuse the odd arm sticking out. 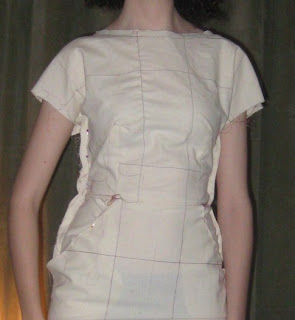 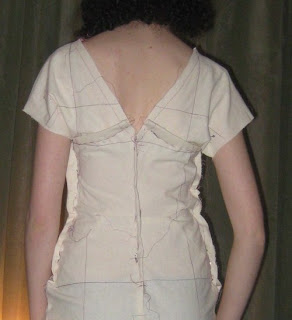 The horizontal pleat above the bust has completely disappeared, and I don't think I need to adjust the waist position. I've still got to take a horizontal wedge out of the upper back and a vertical one out of the centre back. Looking at this, I could stand to put a little bit back in to the side seam, but we'll leave it at that for now.

The skirt still hasn't been properly adjusted, but it definitely needs more room. The side seam is tilting forwards. I'm not sure why, but all the extra room they've placed on the pattern is in line with about halfway up my forearm, so I've had to pinch that out and will have to add a lot of room at the level even with my wrist.

I still have no clue how to tackle the lining, facings or design but it'll get there. Slowly.

See you next time,
K
*No one else gets the Bleak Expectations references, do they?
Posted by Katrina at Monday, April 08, 2013