Or: how I learnt that it's sometimes best to show restraint when making things

This is my new favourite jumper. I adore the colour, neckline and fit. I made it in an absolute frenzy after spending a few successive weekends with some amazingly creative people. I came back to the cutting table ready to be slow and methodical, but must've caught something because this is the result of some frantic design, pattern cutting and stitching. 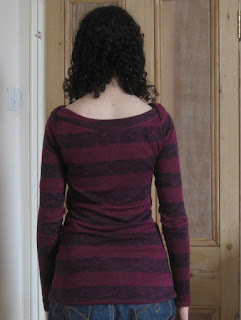 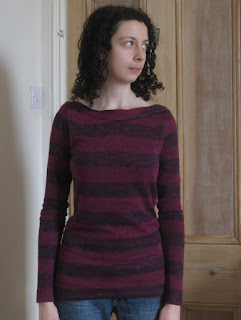 The top is broadly based on a traced t-shirt pattern, which has been the base for a lot of my knit tops. The original has cap sleeves that I had traced out, but I sort of improvised full length sleeves based on my wrist measurement and arm length from shoulder. I changed the shape of the sleeve head to be a bit more narrow. Not sure why.

The neckline is based on a favourite boat neck t-shirt where the band overlaps and also forms part of the bodice and the armscye. I tried to recreate that with this top and think it turned out okay. The front was a little wide which causes the back to dip further than the original. Something to be corrected in the next version. I also thought it would be great to recreate a twisted neckline effect, but it looks a bit sloppy with the stripes. It's still wearable but next time I'll stick to fewer design details.

The fabric was earmarked for my brother's Christmas present, but when it arrived we saw how sheer it actually was, there was no way  he would wear it. It's also far too sheer on its own for me, so I underlined it twice. Once with self fabric and once with some black jersey lying around in the stash. The result is a top that's warm enough to wear on its own in the british spring (always good), comfy for lounging and also able to survive a few washes. I think the underlining also adds a bit of oomph to the colouring, instead of it getting washed out in the light. 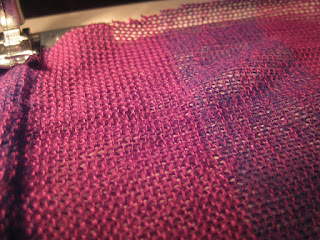 So there you go!

In other news, I've been trying to work out a plan to use up some of the fabric pilfered from the epic swap, but am so far lost. There are plans for jackets, tops, skirts and a funky dress sewing dare. No clue hot to carry it all out. A little overwhelmed...
Posted by Katrina at Saturday, May 18, 2013