Hadestown at Henley: The Persephone Dress

A toast to the world we dream about, and the one we live in now...

Today I have something wacky to share with you: a jacket and a [formal-ish] dress. I don't remember when I realised that I had to fully embrace the Hadestown theme, but when the idea got into my brain it wasn't going to leave until the outfit had been made.

It all started one a cold winter night when B and I went to see Hadestown at the National Theatre. It was a good show, a really good show. A really, really good show. I became obsessed with Hades' costume (and proving that his suit had sparkly pinstripes) and then found a good Playbill article highlighting some of the costume features across the cast. Once I knew for sure that Hades definitely has a sparkly pinstripe suit I was determined to find that fabric. I didn't need to have a project for it, I just needed to own some sparkly pinstripe fabric. For the stash. You know.

Separately, some rumours started emerging at work that our team might get to attend Henley Royal Regatta (2019, obvs). We were asked for our opinions. I was skeptical, I am not a boat person (nor a horse person, not a golf person, nor a ski person) and didn't want to be the only loser in the Stewards' Circle. But, this was a once in a lifetime opportunity to do something completely outside of my ordinary. I sucked up my worry and signed up.

It's worth noting that I had kept this little sewing habit hidden from my colleagues since I joined the team (well over a year at this point). This would be the event where I get outed as someone who makes their own clothes. The reveal (so to speak). No pressure.

There is a dress code, and I needed to find a way to fully respect it while also feeling confident in whatever I ended up in. I needed a fairly formal long dress, and probably something to cover my shoulders. For several months, I didn't give it much more thought. I browsed ideas idly and tried to think of something good that wouldn't be too much fuss to make. This deadline was fully in the middle of of millinery-tutu-summer dancing-volunteering madness* so while I had a fair amount of notice, I had very limited time to dedicate to the make. You guess what happened next.

Ah, Persephone. I found it hard to get my head around her as a character - the fact that trashiness was a positive trait only came across after reading the Playbill article (amongst others). But her energy and exuberance is, literally, intoxicating.

I didn't start the dress design with Persephone in mind. I had been obsessed for a long time with the idea of a lace or embroidered net dress. This seemed like a good opportunity to use up the floral net remnants from my Molly Gaiters (honestly, a pretty trashy fabric). The embroidery design was all over eBay and RTW summer 2018 so I figured it would be relatively easy to get more and make a whole dress. I also figured that it might be a design that other people had seen before in RTW - therefore 'passing' potential scrutiny.

I had the net draped over my mannequin for a while and tested different fabrics/colours as underlinings. I had a vague idea that a green would make it look like the dress was growing a meadow, and the flowers on net would stand away a little. I shoved some green babycord remnants under the net and then left it in place for a few days. It was pure coincidence that the (soon to be) Hades Blazer was already partially constructed and also resting on my mannequin. 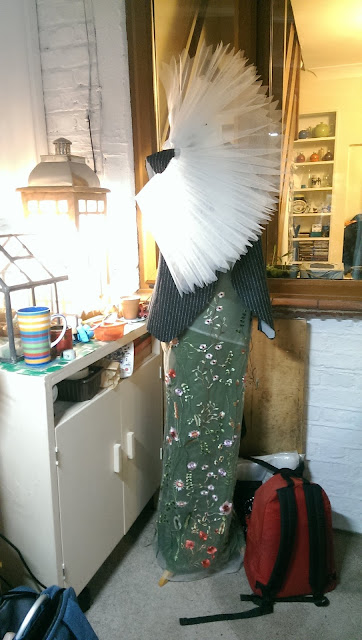 I think this was the first time I had the idea of the Hades/Persephone vibe. I yawned and went to bed. Never make important design decisions at 1am.

Anyway, the underlining fabric is a cotton sateen from Goldhawk Road. I tried to find a good colour match to Persephone's dress, this was the best I could do. It's very yellow, so I am a little worried about how it will fade. In Persephone style, I think these fabrics are probably quite cheap and trashy.

The bodice is underlined and has facings, but I wanted the skirt to be stand out more and have a visible separation between the green and the net. So I only joined them at the waist here. The net is hemmed with horsehair braid and it's a little bulkier than I would have liked. I mis-calculated the skirt length and I needed to turn it up one more time than I'd originally planned. I guess if I ever plan to wear this dress with heels, there's a little bit of excess length I can let out.

The pattern is a mashup of Vogue V8875 and the By Hand London Anna Dress. The skirt is drafted for a giant, so I removed 3" length and also turned the hem up an extra time. I added inseam pockets and am very pleased with them! 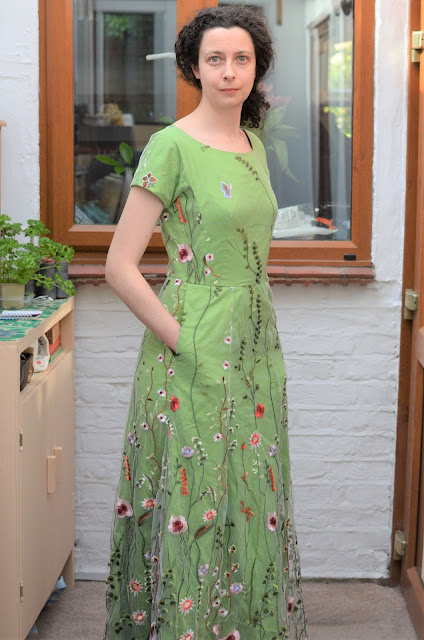 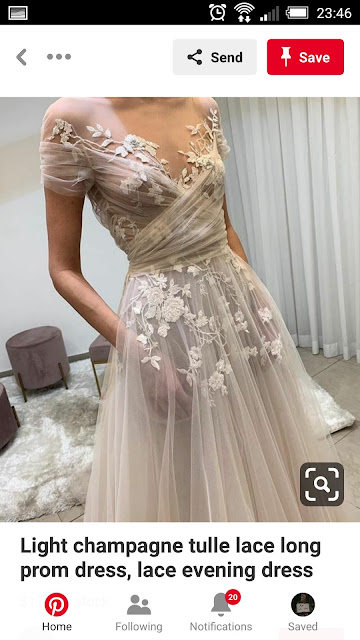 I was working to a hideous time limit on this dress and the insides are mostly overlocked. Still, there were a few construction mishaps.

Firstly, the mesh fabric. Do you remember I said it was all over the place in summer 2018? Wel, unfortunately, by spring 2019 the supplies had mostly dried up! I bought this off eBay and though I ordered 3 metres, I received 3x 1m lengths instead. I took it up with the seller but they were having none of it, so I had to use what arrived. The issue here is that the Anna skirt is a fabric hog and I'd gone from having comfortably enough fabric to calculating where I might need to piece the skirt (don't forget it's a border print, therefore directional). Eventually, it all fit and I only had to get creative with how/where the bodice was cut out.

Secondly, I wanted to be nice and neat with the skirt seams so I french seamed them all. I looked at it afterwards and they were very thick/ugly, so I cut all of them out.

Thirdly, you remember that I said I wanted to use the remainder of my Molly Gaiters fabric? Well, I diligently matched the embroidery design on the new fabric, made up the skirt, stood back to take a look and saw a big problem. It's a different net! 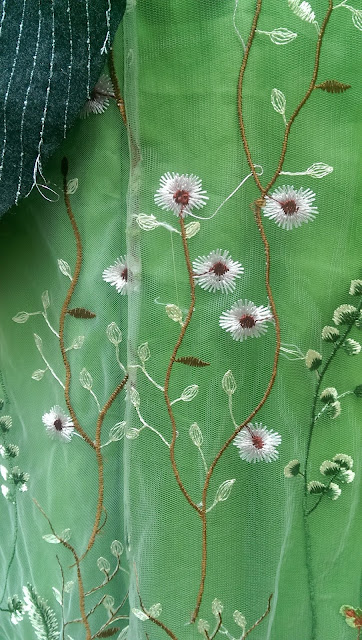 I'm glad this was the CF skirt panel - it meant there was only one real solution: cut it out, find a big scrap of fabric and recut the piece. I was not very confident there would be a piece the right size, but I got very lucky. I assembled most of the skirt before attempting to cut out the bodice, and this really paid off here. If I had cut the bodice first, there would have been no big fabric scraps for the replacement skirt piece.

The dress closes with an invisible zip in the CB seam - it finished well but the zip is slightly too short and so there is only one way in/out of the dress. 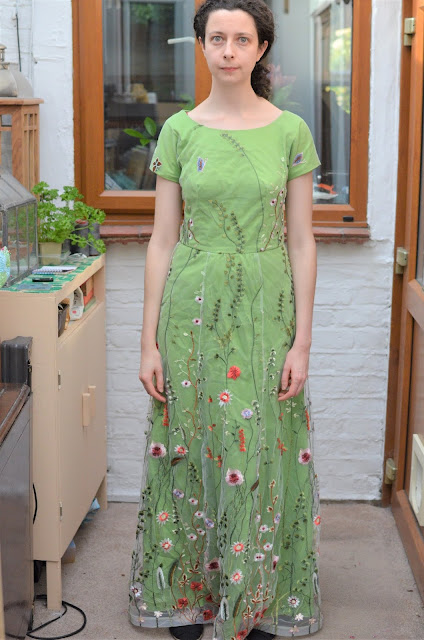 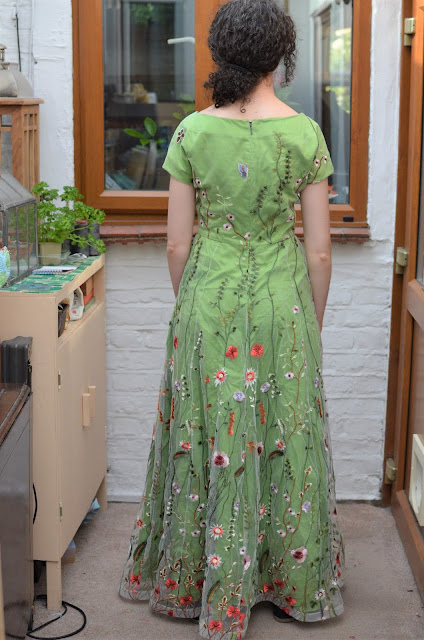 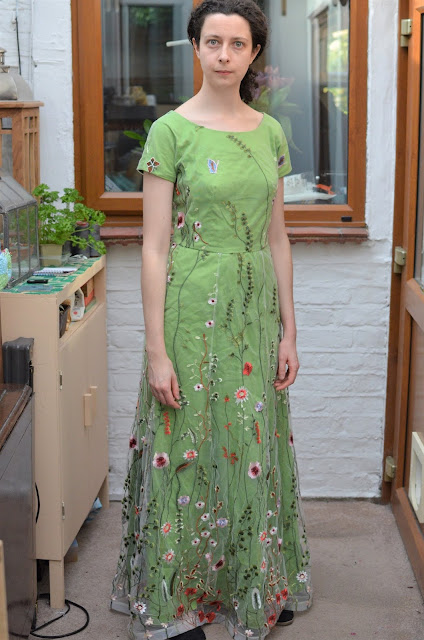 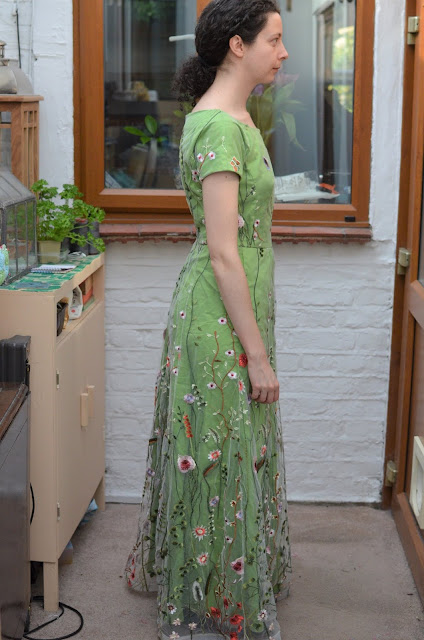 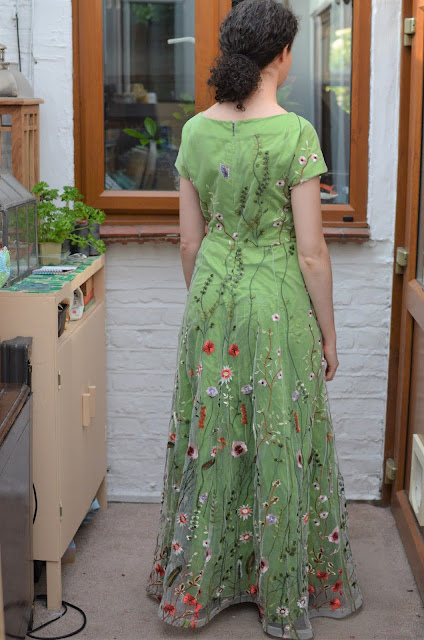 Anyway - this is the Persephone dress. I think it ended up okay, though I can't decide if it's a bit dumpy/childish or not.

Next up: the Hades Jacket