Feeling the Effects of Fringe Thinking

Fringe Thinking: (noun) The effect on memory, perception of time, and ability to distinguish separate events as experienced at the Edinburgh Fringe Festival.

I just got back from my first real theatre show since Edinburgh; and as the lights went down, I found myself wondring "how long can a physical theatre contemporary adaptation of Uncle Vanya really last?". Luckily, it was just about the length of a Fringe show, I'm still not sure if my attention span is back to normal. Meanwhile, it could be fun to quickly mention a few shows which had a particular memorable effect while at the Fringe.

Leaving, Limbo, Landing
This was an outdoor physical theatre show by Caroline Bowditch and East London Dance. The show explores the reasons and motivations behind why people choose to leave their home towns, or countries, to move elsewhere. I found it interesting because I'm sure one of the performers was deaf, and some of the choreography integrated sign language. The costumes, designed by Anny Grewcock, were also very striking. Made out of uncommon materials including bubble wrap, hessian sacks and postage tags, the costumes also involved a lot of interesting shapes that were well fitted and morphed as the performers moved. I'd definitely like to take creative inspiration from Grewcock and translate some of them into my own future projects. 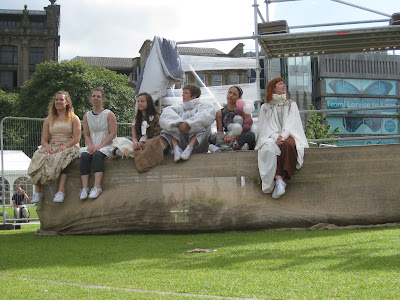 Fork
Finnish electronic acapella. Sixteen quid. This show was a good reminder that you get what you pay for. The show struck a particular technical cord because of some mad wizzardy in getting singers to sound like the actual instruments. Now, although this is seriously impressive, does it undermine the whole idea of an acapella group? In a full length show, would they strip down the effects so we can understand the processes behind the performance? And surely the sound engineer deserves a little more recognition?

Departure Lounge
This show was completely unexpected. It's about four British lads stuck in an airport departure lounge, waiting for a flight home from Spain. Everything from the stripped down set, the costumes to the style of the songs and the subject matter, is completely alien to my concept of "musical". Perhaps that's why it's so easy to remember.


What do you think? Are there any shows which have had lasting effect on you?
Posted by Katrina at Thursday, October 04, 2012