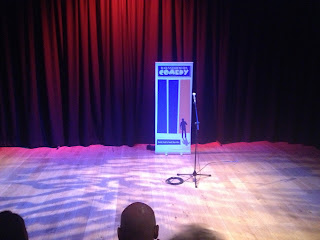 This isn't your normal standup comedy night. Barnstormers takes place in the Winchester Discovery Centre, one of those trendy learning resource centres with a functional public library, gift shop, cafe and  a proper performance space.

Obviously this isn't like other dark, underground, beer-soaked comedy clubs. This is an affluent area of Winchester with a comedy night in a functional public library. There are no stag night parties, jaded businessmen, lads on the lash, or rowdy students. Compere, Kevin Precious, was obviously presented with a challenge when he found out most people were happy to strike up a dialogue and were relentlessly nice. This could also be something to do with the lighting: the audience remained fairly well lit throughout the evening, due to the shallow stage area and fairly bright wash. It's not a gig well suited to shying away from the compere. It took a while to find some humorous suggestions, but Precious succeeded in building up with some great situations.

Shaun Percvial, who must be older than he looks, was refreshingly crass with jokes about his crap home town, bands on drugs and cigarette warning messages. Kate Lucas was truly something unexpected. Her sweet and petite stature, coupled with her self-depricating and friendly spoken introductions, present a striking contrast to her often dry, bitter and grotesque songs. If she moves beyond these short standup sets, it will be interesting to see how she'll diversify from her fairly dark material.


Finally, Martin Beaumont is a king of one line gags. He's visibly at ease with a set he's done many times before, and can pause to anticipate, accommodate and enjoy the reactions of the audience. Incidentally, he did the same set at Salisbury and it also went down well. Polished, deadpan, acting as if he's the only sane man in his town full of puns and people losing their memory, Beaumont is a comedian you could easily see perform the same gags a second, third or fourth time and they'd still be leave you with the giggles.

(On a side note, I'm trying to pick the blog back up...and write many more reviews of live shows. Still getting used to noting down impressions and writing reviews. Hopefully this will be the first of quite a few! Also, there are a few projects on the way so watch this space)
Posted by Katrina at Sunday, September 23, 2012