As I write this, it's snowing again. That's pretty good news for me and also for T who requested (for some reason) back in January that I make him some fingerless gloves to wear when he's in the library. Apparently it's still gloves weather in there too. 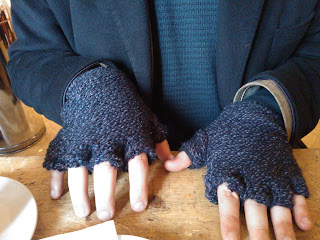 I have a bit of a history with fingerless gloves. They were part of my very first project and then as part of a mad drive to resist throwing out a much loved pair of socks. Both pairs have been worn about twice. Both pairs have also been technically very simple.


But these gloves are different. They're special. Not only must they be fit for someone else to wear on a regular basis, but he's probably not the kind of person to appreciate gloves made from old socks. These gloves also needed to reach up to his knuckle joints without restricted movement.

Drafting and completing this pattern has been a bit of an intellectual exercise. The geometry is not something I'm very familiar with, and the pattern I drafted had 32 pieces once all the fabric was cut. The whole thing is hand stitched too. Shoving something so intricate through a machine would have been a recipe for disaster. 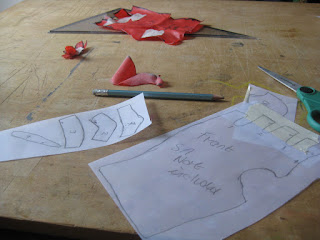 I drafted the pattern based on the information in a latex glove I basically used as a hand sloper. Stick it on T's hand in the middle of a busy cafe, and mark glove length/fit and also rough size/shape of the gussets. Then this got transferred to paper where I remembered the absolute importance of notches to match different bits. Oh well. 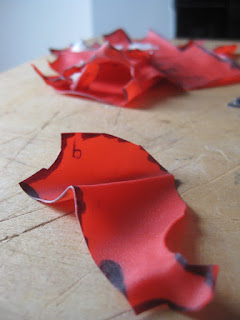 I did cut, stitch and begin to construct a lining but I ended up scrapping it because it was far too bulky, so that was a bit of a bugger. 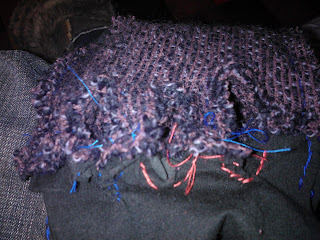 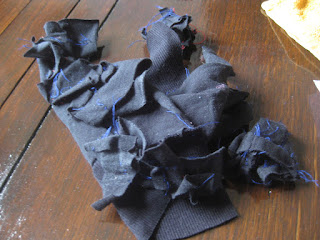 The saving grace of this pattern was the fabric. It's a gorgeous chunky wool from M&W, which unlike the green stole wool, has some sort of weave in the back.

Ultimately, the weave meant the tiny parts didn't fall to pieces when they got wrangled around and unpicked. It also made the (dodgy) hem job a lot easier. And hopefully it's volume is going hide a lot of the stitches.