In making T's gloves, I bought about half a metre of the blue wool, which was luckily just enough to make this sweater vest too: 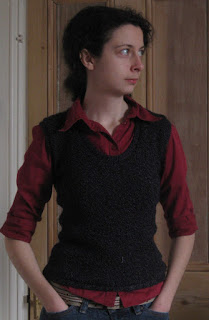 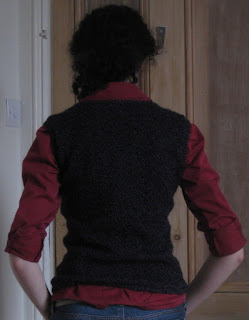 It's supposed to be a v-neck but I don't think the scoop looks too fudged and I'm actually really happy with it! The pattern is an altered version of my favourite t-shirt. The innards are a little untidy but I'll tidy them up once the vest has been worn a bit.

Just as a comment on how tight it was to get this out of the scrap piece: the whole thing is cut without seam allowances and the banding is pieced to high heaven. It's great though and will hopefully remain a good barrier against the ongoing winter!


On a side note, there's a load of cool cultural stuff coming up:
- Steptoe & Son at the Lyric theatre. Kneehigh are coming to the end of their tour, but there are still some shows coming up
- ROH broadcast day! Royal ballet's Alice in Wonderland being broadcast live around the world on the 28th March (including at my beloved Regent Centre)
- And The Rest Is Noise at Southbank Centre. American weekend coming up...
- Andrew Nemr....
- Joe Bonamassa at the Royal Albert Hall

And of course, end of the month Fridays in museums!
Posted by Katrina at Thursday, March 21, 2013