I went through a spate of hand sewing recently. Not embellishments or ill-advisedly dragged out Alabama Chanin projects but simply a lot of hand basting. In practice, this means I actually spent a lot of time sewing pleats.

This skirt has some of the techniques you use to pleat a kilt. Ever loathed to call this kind of thing self-drafted, I will just admit to not using an actual pattern. This was a great improvisation - I just cut, basted and tweaked a bunch of different rectangles.

The lining is a hemmed rectangle gathered to a suitable length of the waist. The outer was a very long hemmed rectangle pleated into some sort of interesting repeat. The stripes are printed and not woven so there were a few issues with straightness and evenness of stripes. It's surprising how pedantic you can become about these things!


The pocket looks like a welt but is actually very simple. It's a separate panel, folded to make a pocket, basted into place and matched to the rest of the skirt.

The waistband is an interfaced rectangle and there is a lapped zip hidden in one of the pleats.

Functionally, the skirt is cool and breezy but the lining contributes some warmth on cool days and some modesty if there's a draft. The care is very easy, but I'm resigned to never having perfect permanent pleats. RTW pleated skirts have fibres, finishes and factory machines that produce and set these pleats, but those aren't at my disposal.

Yes, it runs a bit large. Consider it as an insurance policy against gaining weight. 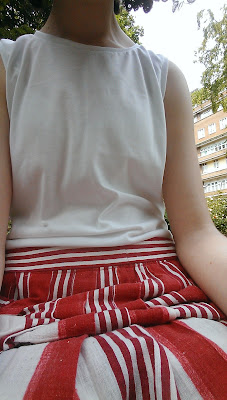 I want to say this was a simple project. In a way it was - no sizing, alterations or prep. I just ran with what happened as it happened. On the other hand, it was a test of patience because the pleats took about a month to hand baste. Perhaps that was excessive, perhaps it was a good lesson in virtue and improvisation. You're not really supposed to bust out flash moves unless you're happy with the risk that it might not work out. It's good improvisation because you can start out with an idea in your mind, but explore and create several variations around it. It's good improvisation because it hangs together fairly well on an established underlying structure and because you're supposed to respond to other influences and interruptions.

On this occasion, the idea was borne of the fabric. I spotted this in a clearance bin on the street in Stockholm. Deep in the heart of Scandinavia, inspiration struck me like a bolt: I could look like Moominmamma.

I took this idea and ran with it... 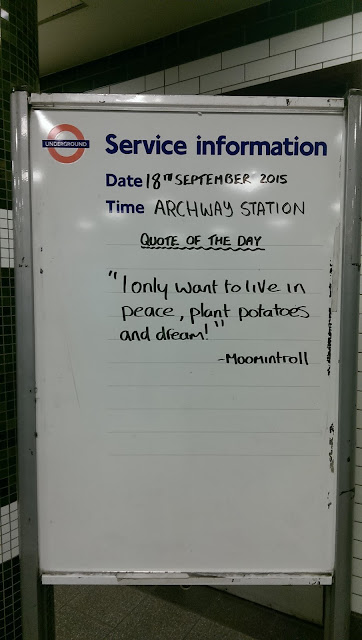